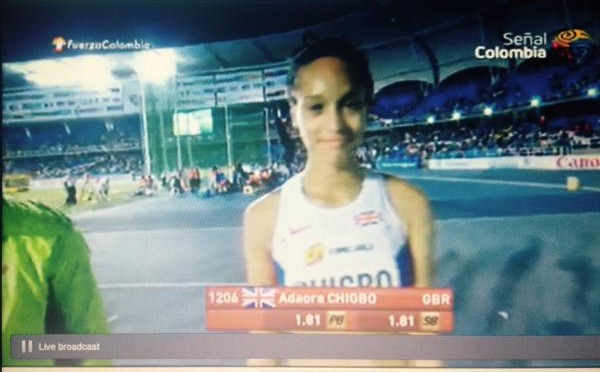 Nailbiting is the only way to describe the qualifying rounds of the women’s high jump! Ada’ora jumped magnificently to qualify for the final, but not without some heart-stopping moments along the way!, a 1.75m clearance enough to get through.
A terrific achievement. Ranked 10th, and the youngest in the final, only the most wildly optimistic of supporters would have predicted a medal. Three first-time clearances at  1.65m, 1.70m and 1.75m saw her tied for first place with 6 other athletes and definitely in with a chance. Sadly 3 failures at 1.79m saw the end of her competition, and a 6th place finish. A fantastic effort. With the winner Michaela Hruba from the Czech republic leaping a massive 1.85m to win, Ada’ora should be proud of her efforts and looks forward to a long career representing GB.
Next stop Samoa in the Commonwealth Youth Games in September..
Tweets by @NorthSomersetAC