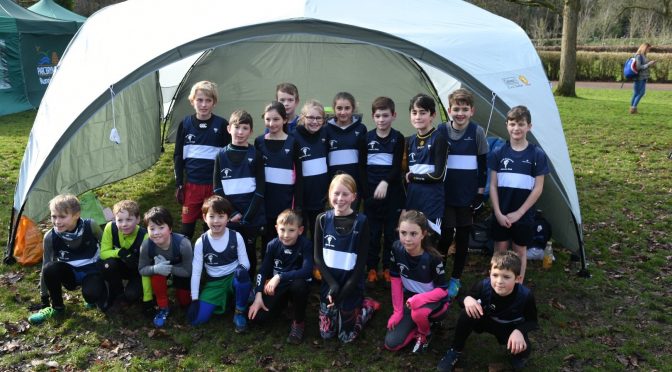 The penultimate fixture of this seasons Gwent Cross Country League in Pontypool produced by far the toughest track of the five race series. Another 50 pus turn out of club juniors had to contend with a near vertical climb that appeared to have no end!

Millie Redman was the top club performer of the day with an impressive 3rd place and just five seconds off the winner. Mia Darlington, Lyla Briffitt and debutant Harriet Brown worked well as team with just 8 seconds between them in 22nd, 25th and 28th respectively, ensuring the team finished third on the day.  Ellie Seagle 38th, Willow Preen 60th and Livi Sherlock 61st completed the team scores from a field of 93 runners.

Miss consistent ‘Keira Devereux’ finished 5th in the U13s race with Grace Metcalfe and Mary Hemmings both having their best races to date in 32nd and 34th. Blythe Jones was next home in 38th place followed by Abigail Taylor 42nd and Abigail Briffitt 52nd.

Ollie Campbell made a welcome return to form with a hard fought 5th place, which took him to 3rd place overall in the individual league standings. Charles Broadhurst continues to improve with every race and his 17th place was his highest placement so far. Ollie Andrews was another to impress, showing lots of potential as he finished 20th with Will Sandiford 24th  to  ensure the boys finished 1st on the day, and consolidating their 2nd place overall with one race to go. Will Maine looked strong again as he finished 27th followed by Reuben Dean in 28th, Louie Brunsdon 30th and Sam Holloway 35th. Stan Hemmings continues to improve with a good run in 46th and Oliver Haley completed the team scores in 65th.

Poppy Burton Dickie had a super run in the U15 race. In her strongest performance to date, the newcomer showed great strength and looked totally at home over the testing course to record a fine 12th place. Steph Brooks finished very strongly over the final 400 metres passing several athletes to record an 18th place with Ellie Redman making a welcome return to form close behind in 20th. Alysha Forsbrook and Victoria Pearson completed the team in 32nd and 38th places respectively.

Alfie Hocking and Ben Hamblin worked brilliantly together during the U15 boys race and were rewarded with their highest placing by a distance at this level, with superb 6th and 7th places respectively. Newcomer Theo Edwards didn’t enjoy the hills quite as much as his team mates, but there’s plenty to come from this hard-working youngster and 22nd is still a very decent position at this level.

Callum Day ran well for his highest place to date in 35th to ensure the boys were 2nd team on the day and now sit just 4 points off third place in the league standing with one race to go. Debutant Adam Ray ran in trainers up the muddy hills for a very creditable 36th place, so  more to come for sure from the newcomer who was followed home by Max Davies in 41st and Jamie Pass 48th.

However, it was Jamie Van-de-Velde who took the plaudits as he showed amazing strength of character after suffering an Asthma Attack almost as soon as the race started. Others would have pulled out after such a set back, but not Jamie! After recovering he set off and ran his race gaining many admirers around the course.

It was good to see U17 Jack Wilkinson back running again after an extended period of injury. He partnered ever present Will Cheek in the  U17 race and coped extremely well over 2 laps of the super hilly course. Jack finished an excellent 13th place with Will 23th from a 42 strong field.

Next weekend sees the club taking another 50 plus athletes to the biggest event of the season ‘The National Cross Champs’ in London.