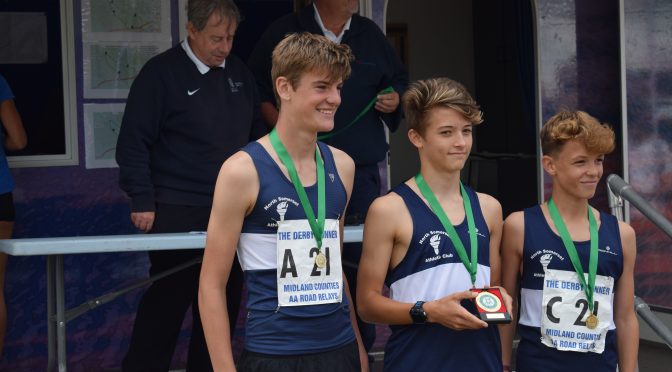 A record 9 teams from North Somerset Athletics Club competed in the Midland Road Relays on Saturday 24 September in Sutton Park , Sutton Coldfield.  The day was dry but windy as the junior athletes took to the line.  Pride of place for North Somerset AC must go to the under 15 boys ‘A’ team in winning the championship, 13 seconds clear of their nearest rivals from Charnwood AC (Loughborough) an nearly 2 minutes in front of the 3rd place team from Westbury Harriers.

Sam Gentry lead the team off on the 1st leg and bought the team through the 1st changeover in 4th place within touching distance of the leaders.  Matt Howard powered his way around the 3.88km challenging course, setting the 3rd fastest individual leg time and handing over to Jack Wilkinson in 1st place with only 34 seconds covering the top three.  Jack managed to keep his composure and bring the team home to a magnificent achievement for these young athletes.  To top off the success of winning the championships all three boys finished in the top 10 individual leg times.
The strength in depth of the under 15 boys age group, with North Somerset AC having two further teams finishing in 21st (Jacob Faulkner, Kes Pitchers and Jamie Carroll) and 27th (Ollie Lock, Will Cheek and Alex Collins) looks promising for the forthcoming cross country season.
The event started with three inexperienced under 13 teams competing with only 1 of the 9 athletes having completed this race previously.  The under 13 boys finished a magnificent 15th (Will Maine, Louie Brunsdon and Cameron Baker-Perry).  The under 13 girls showed they have strength in depth, however both teams found the going harder but still managed 27th (Ruby Owen, Connie Ballentine and Ella Johnston) and 32nd (Steph Brooks, Holly Avery and Sophia Murray).
Next to race were the under 15 girls, and once again only 1 of these athletes had raced this course previously, but the girls fought hard across all three laps and finished in 21st place (Lucy Maine, Meg McCrum and Eleanor Redman).  With just 20 seconds covering all three athletes it looks like there could be exciting racing over the coming winter months.
The under 17 boys of Callum Smith, Luca Murray and Jaylan Bacon battled throughout this very competitive race to finish in 13th place, missing out on a top 10 finish by 20 seconds.
For the first time ever North Somerset AC were ale to enter a Senior Mens team in the 6 stage relay.  The team were hoping to finish in the top 25 finishes to qualify for the National Road Relays.  Unfortunately the team finished agonisingly short even with Josh Davies passing 12 athletes on the last lap.  With three of the team being under 20 years old, this was a massive stepping stone in their running careers and the team of David Warnes, Cameron Coetzee, Joe Gentry, Mike Proffitt, Julian Emery and Josh Daveis can look forward to the winter races and the potential to qualify in 2017.
Tweets by @NorthSomersetAC