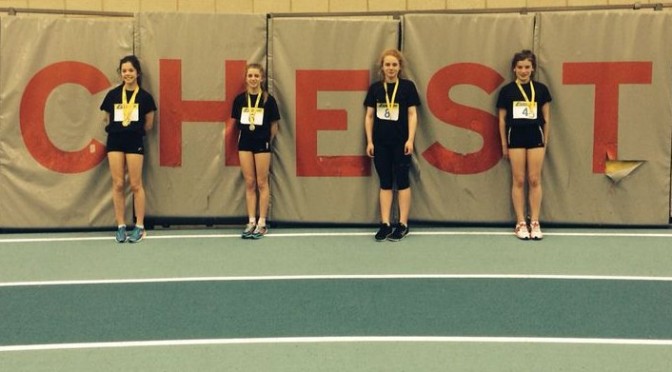 Avon Girls team produced their best ever effort finishing second in a close battle with Surrey in the National Sportshall finals in Manchester.

NSAC members made up 5 of 12 strong team, with each of them returning with a medal.  The Under-13 Girls team managed by Susan Jones excelled with four UK titles in the Field events. Nina Nemi (Colston Girls) took the Vertical jump with 66 centimetres. The versatile Anna Loughlin (Colston Girls) won the Shot with 10m 43 with Ellie Shale (Backwell) third with 9 metres 64 centimetres. Her school mate Caroline Walder broke the Ulster and Welsh records with 90 speed bounces and the impressive Emma Bakare (Backwell) won the Triple Jump with a massive 7metres 66 centimetres which also would have been a record in Ulster and Wales. Emma also took third place in the 2 Lap race with 21.4 seconds.

Harriet finished eighth in the 6 lap just ahead of Lottie Rudd (Bristol Grammar School) in eleventh place of the 22 starters. Lottie combined with Nina Nemi in the paarlauf for fourth place. Avon Under-13 Boys team including Fred North and Henry Cox won their event and have now won a record breaking seven United Kingdom titles since 1994: The greatest number in Sportshall history.