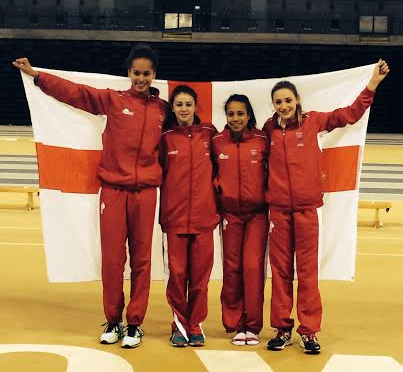 representative vest for England, and producing one of the performances of the season. The 4-nation Combined Events International was staged in the Emirates Arena Glasgow and saw the top 4 girls from each of the Home nations going head-to-head in an Indoor Pentathlon. The ex-High Down pupil was competing in the under-18 category as a 15-year.

A series of fantastic performances saw her stun even her most optimistic supporters! Her first event, the shot put saw the Bristol Grammar School pupil produce a personal best of 13.96 metres to take the lead. Her second event, the 60m hurdles produced another personal best performance, a 9.45 secon

d run to keep her in the hunt for medals. Yet another personal best of 5.26 metres in the long jump was followed by a huge high jump of 1.77 metres (her fourth personal best of the day). A gutsy 800m run in 2:32.28 minutes confirmed an astonishing individual silver medal. This also saw her as the top England scorer, leading them to team gold on the day.

The performance has become even more impressive since the realisation hit home that she smashed the UK under-17 record with a score of 3846 points (the previous best of 3599 was set in 2004).

Ada’ora has been coached since 2008 by Chris Millard at North Somerset AC, and her support team now consists of Bath University- based Coaches Ken Holmes and Paul Weston. Millard said “Ada’ora has trained with us for around 6 years. She is not only talented, but is a fantastic role model for others with her attitude and approach in all areas of life. This is one of the best days I have been involved in with Athletics. No-one deserves this more than Ada’ora. I am confident we will see her at the World Youth Games in the not-too-distant future. She is a star in the making.”