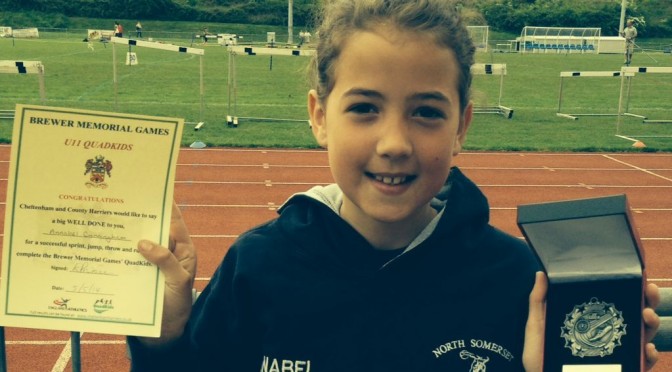 The Brewer Games at Cheltenham saw a number of PBs for North Somerset athletes, as well as Quadkids success for U11 athlete Annabel Cunningham.

In the Pole Vault event Georgia Houston set a new PB of 2.00m but was pipped by Caroline Walder clearing 2.20m.

Katie Parker narrowly missed her own Discus club record by just 2cm, but had a good day throwing consistently in both Hammer and Shot Put.

It was also good to see Ellie Wallace making a winning return to competition after injury in the 800m.

The star performer of the day though was Annabel Cunningham. In just her second Quadkids competition, Annabel performance well in all four disciplines and claimed second place overall. Annabel was pushed and supported all the way by team mate Alysha Forsbrook, but by finishing second in the 600m and winning her 75m Annabel did enough to claim the silver medal.