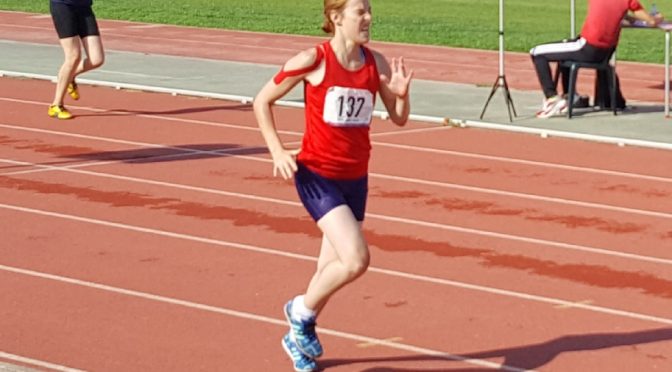 The 6th-12th August saw Sant Cugat, Spain, hosting the Cerebral Palsy World Games and presenting a National representation opportunity for North Somerset Athletic Club’s Pip Mannings. This unique multi-sport competition has been taking place since 1989, and this year saw 800 competitors from 24 countries come together to compete on the outskirts of Barcelona!
Pip, born very prematurely in 1993, has Cerebral Palsy and a Learning Disability, but after spectating the Paralympics in London 2012, she was inspired to try Athletics and joined North Somerset Athletic Club. Under the watchful eye of Club Head Coach Chris Millard, she has demonstrated impressive progression to take her place in England’s Para Athletics & Race Running team, contending in the T35 100m and 200m on consecutive days. In her first International competition, Pip was cheered on by family and friends as she battled her way to 4th (100m) & 5th (200m), narrowly missing out on those podium places. And the excitement didn’t stop there… Off the track, a great team spirit and friendly atmosphere saw Pip making friends with other athletes, supporters and officials from as far afield as Singapore and USA! A wonderful experience at a fantastic competition.
North Somerset AC would like to add how incredibly proud we are of Pip; she has worked hard for 6 years to earn this well-deserved call up and is much loved within the club.
Watch below to see Pip take second place in her heat on the line! Pip fighting off the competition to earn her place in the final of the 200m!
Tweets by @NorthSomersetAC