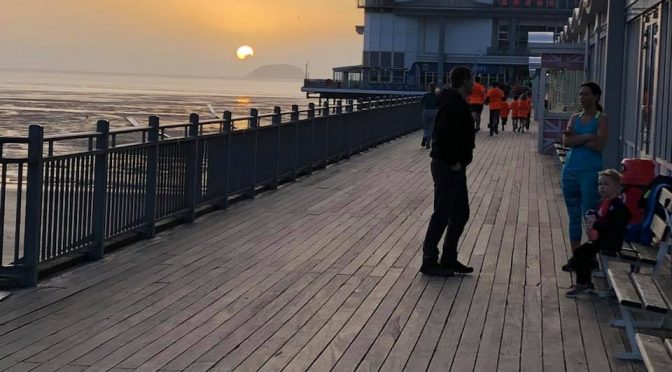 What a day! Nearly 300 runners contributed to the challenge of keeping a mock Olympic torch moving around the beautiful 700m structure for the full 24 hours (running, skipping, three-legged, piggy back, conga!) The theme of ‘Commonwealth Games’ (or as bright as possible) added to the enjoyment of the event. Apart from a couple of hours of drizzle and high winds, the weather was very kind, allowing this to be fun, rather than an exercise in survival!
The charity challenge will raise at least £10,000 for development of Athletics facility, equipment, and Childrens Hospice South West.

The day started at 12 noon with the wonderful rhythm from North Somerset Samba Band, accompanying the athletes on their way. Visits from England Athletics representatives and Kylie from CHSW helped inspire the athletes. The day saw wave after wave of young Athletes arrive, collect their event t-shirts, and get stuck into their hour shifts. Many returned for a second stint once they realised how much fun it was. The night-time is always the tough time with just 12 hardy older teenage athletes and senior coaches tasked with continuing the movement. Midnight saw Isabella & Izzy help with the load. Poppy arrived shortly afterwards, complete with headtorch (good idea!) and dug deep to support the flagging group (many of whom were asleep, ha ha!) At 2am Paul & Ellie arrived back from a day in London to keep the torch mobile.  4am saw Eloise, Alistair and Harry taking the burden on. Cold, windy, and eerie in the dark, the flame continued on its way until the wonderful sight of daylight, (hot breakfast!) and the next wave of young athletes arrive. Sunshine bathed the Pier during the morning, what a beautiful feeling…The final hour is always special, and a fanfare of cheers and applause from spectators brought this amazing event to a close. Some of the athletes managed an absurd number of laps, 10-year-olds running half-marathons, an 8-year-old managing 17 miles, full marathons (and more) from some of the older teenagers and seniors. Individual fundraising efforts were also extraordinary, many raising several hundred pounds (including a local school organising a non-uniform day!)
A massive ‘thank you’ to all who supported the event, and especially to everyone at WSM Grand Pier who allow us to use this iconic facility. We wouldn’t want to do this anywhere else!

To donate to this event https://www.justgiving.com/campaigns/charity/northsomersetathleticclub/nsac2018relay

Some stories to read, and be inspired by…

Joseph has epilepsy. He was diagnosed aged 4 with a meninangioma brain tumour and has had some tough years following diagnosis. We nearly lost him due to a 7-hour seizure in. He has since had brain surgery (feb 2014) and thankfully has grown stronger and stronger. He still has side effects and struggles in school etc and life isn’t easy for him but my goodness we are immensely proud of him, to see him on Saturday representing NSAC was an emotional and uplifting experience and shows just how far he has come. He ran 12 laps of the pier at 12pm-1pm and he was inspirational. He loved every moment and so did we!

Owen aged 11
He’s in Y6 and ran a half marathon on Saturday evening with a beautiful sunset in the background. He had warmed up with 20 miles on his road bike that morning, had a relaxing bath then set his mind on the important job of raising money by running. Owen was spurred on by his running partner Henry who also ran a half marathon and also Chris & Chris who were a huge inspiration to him when the going got tough. Owen returned the next morning, determined to add his support at the end of the relay and enjoy the final lap

POPPY aged 14
On saturday morning she completed in the South West Championships Duathlon, then she ran non-stop between 1-2am on the pier (she was a bit scared of the dark and noise of the waves and wore a headlight), was back between 9-10am and again ran non-stop,  finally came back for the last 15minutes of the relay.  In total she did 40 laps, so around 28k and she ran every step of it

Molly set herself the goal of running 7 laps over her two sessions having not done anything like this before. During her 4pm hour Saturday stint Molly had run/walked 10 laps already – even some with the teddy (NSAA mascot Milly)

Molly was back again early morning at 8am on Sunday to help out the night shift volunteers and then stayed until the final lap as she wanted to support the other runners and her determination kicked in and she decided she wanted to complete 30 laps before the end. By 11am she had run,walked and even three legged race with her mum her 30 laps. With an hour to go Molly decided to go for 40 laps!

With tired legs, and still determined to carry the teddy at times!, she kept going with support from families and other runners. It took a sprint on lap 39 to get back in time to join the other runners for the final lap – which was taken at slightly slower pace

So overall Molly ran, walked, skipped and three legged walked the pier for 40 laps which we worked out to be about 17 miles!  Super proud of her achievement – and determination!

SAM aged 8
Sam loved taking part and I thought that his achievement of running for the full hour without stopping and completing a distance of 6.3 miles, is worth a mention. He has never run that far before

TOM aged 10
Tom really enjoyed it, despite not feeling that confident about distance running beforehand.  He enjoys sprinting, so didn’t expect to run a distance well, but once he did one lap he started to really enjoy it.  He had set himself a target of 5 laps, then after a few laps said he wanted to do 10, then kept going and managed 12.  Thanks for introducing him to the idea that he can do it and enjoy it!

ELLIOT aged 11, Joe aged 8 (plus Florrie aged 5!)
Our children loved the event. Elliot was thrilled with his non stop 60 minute stint and managed over 12km. Elliot’s younger brother Joe has definitely now got the running bug. Even their little sister Florrie, who didn’t officially take part, was sprinting around the pier chasing her brothers… one for the future for sure!
ZEKI aged 11
I was amazed that Zeki ran 15kmish in the first hour of his first ever Pier Relay. He can’t wait to do it again & have a go at half marathon distance, at least, next time in two years time

LYLA aged 10
Lyla  ran 6 miles, the furthest she has ever ran

This is the first event Joe has taken part in for the club as he only joined in the new year and he was really excited about it, he set himself a target of running 7 laps (5k) as he’s never run this far before.

As the big day approached and the sponsorship kept rolling in (£250) Joe started to feel the weight of responsibility to all those who sponsored him and began worrying about letting them down if he couldn’t make his target.

On the day though he needn’t have worried, he smashed through his target of 7 laps and went on to do 11 (around 8k), we’re very proud of him and he’s gained a ton of confidence and proved to himself that he can achieve what he puts his mind to.

HENRY aged 10
Ran a ½ marathon, and had his shirt signed by Chris to confirm!