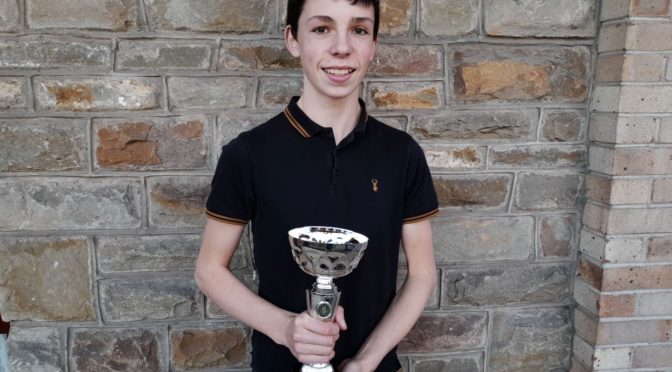 Without doubt Ben C was the clubs most improved runner. After placing in the top 30 as an U11 Ben then burst onto the scene in the U13 age group with 3 Top 10 finishes in the Gwent League ( 9,7,5 ). Ben ran a superb race at the high standard South West Champs placing 14th,  and ensuring the club secured a team Bronze and team Gold in the Gwent league. This was all achieved as a first year in the age group. In addition Ben also qualified through the schools races finishing 2nd at the County Schools and representing Avon at the South West School’s Champs where a knee injury frustratingly ended his season early. Ben has always been a regular at training eager to learn to become a better athlete.

Elliot J is the winner of the Coaches Award. An outstanding season starting with a strong leg at the National Road Relays where the team finished top 20. Elliot was an ever present at the Gwent Leagues ( 12,9,6,2, ) a Team Managers dream, the highlight was his second place finish at Blaise Castle just a few seconds from the victory he craved. A fine team player, Elliot led the team home in 12th place at the South West Champs to for the eventual team Bronze. Another top performance came at the National Cross Country at Nottingham, this is a race where a placing in the top 100 requires quality running, Elliot delivered yet again for his 79th place finish. Elliot showed great consistency throughout the long season and deserved his selection for Avon to compete at the prestigious inter counties cross country in Loughborough.

Our Endurance Cross Country athlete of the year goes to Herbie C. Helping the team to a decent finish at the National Road Relays, Herbie’s fitness and confidence improved as the season went on with a breakthrough 3rd place Gwent League finish at Pembrey Park. Qualifying for Avon selection following his performance at the County Champs the seasoned continued to go from strength to strength. A crucial run in the final Gwent league at Chepstow where a 5th place including a dip on the line to take the Carmarthen athlete gave NSAC the critical point to beat Carmarthen in the overall team award for Gold. The final race of the season saw Herbie relish the mud and hills of the National Cross Country finishing an outstanding 57th in a quality field, leading the team home to a top 10 finish.