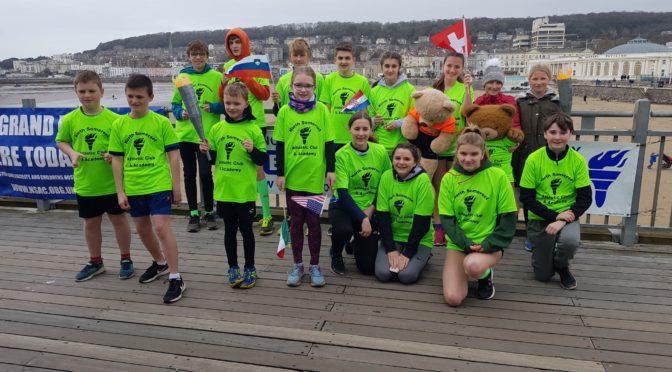 Young athletes from North Somerset Athletic Club and Academy successfully transported a mock Olympic flame around the spectacular WSM Grand Pier for a full 24 hours non-stop. The sixth running of this event saw the athletes and their families working as part of a team to ensure success. Over 150 under-18s took part, along with a similar number of supporting family members. Nine athletes, including 6 aged 13-15, stayed for the whole event, the ’24-hour heroes’. Money raised will be used for facility development at Clevedon School, and equipment at NSAC, and a substantial donation to the Childrens Hospice South West. Massive thank you to some amazing individual fundraising efforts, many well in excess of £100 (see below)

For the best part of the weekend, the weather was very kind (especially compared to previous weekends!) but the night time shift was a very different proposition! Extremely strong winds and torrential rain made things uncomfortable, but also runners ‘enjoyed’ the extra challenge.

Thank you to Weston-super-Mare Grand Pier for allowing us access to this wonderful structure. Also, to Pro Peaks for once again producing amazing t-shirts. Thank you to all athletes and families for being an important part of this quirky event! What an amazing achievement for the 9 athletes who committed to the whole 24-hours. Supporting the young athletes, braving the ‘grim nightshift’ on the cold, dark, and extremely wet and windy night, and clocking up some serious mileage.

The team comprised Herbie A, Will S, Mary H, Stan H, Conor H, Charlie H, Bonita W, Sophie M & Chris M. A massive thank you to those who turned up to help during the night shift (Eloise S, Tony B, Ian W, and Adele S) As well as a great team-building exercise, and awareness of athletics in North Somerset, the event serves as a fundraiser for NSAC and the Childrens Hospice South West. The previous five events (2011, 2012, 2014, 2016 & 2018) have seen upward of £40,000 raised, and has supported the building of training facilities at Clevedon School, as well as equipment purchase (not to mention £5000+ raised for CHSW). This year’s event saw a total in excess of £10,000+, and a cheque for £1500 has been sent to the Hospice with an official handover to be organised when safe to do so (to add to the £200+ collected in buckets over the weekend). The following raised in excess of £150 each for their efforts on the Pier and will receive commemorative trophies, an invite to the handover, and free vouchers for NSAC Fundays; Samuel B, Bonita W, Zac B, Issy H, Elijah L-H, Toby A, William B-W, Hannah B, Joe B, Serena B, Molly C, Tom C, Ewan D, Zoe E, Emily F, Jeremy K, Pip M, Sophie M, Chris M, Amy T, & Georgia W. Amazing effort everyone! We encourage individuals and families to share their stories with us. Achievements, funny stories, anything they want us to hear. Below is just some!

“I hoped to do 50 laps at the NSAC pier relay. On Saturday I did 31, half marathon length which was great. I came back on Sunday now wanting to go for full marathon length so really pushed myself, even if had to walk some, and I got the 61 laps – 26.3miles!   I was really happy and enjoyed running the relay with everyone.” Molly aged 11 Conor enjoyed being one of the 24-hour heroes, clocking up an impressive 43.2 kms, with the help of some night time pizza, chips and snacks. Despite the rain, wind, and stiff legs the following day, he hopes to do it again in 2022 and raise more money for children’s hospice south west Jessica-Mai, aged 10, ran her first ever 10k and raised an amazing amount of sponsorship in doing so. We are so proud of her achievement and for raising money for a club she has been warmly welcomed into and a wonderful charity. Tony B decided to help with the wet and windy night shift and ran about 21k between 12.45am and 3.15am.  He says he definitely witnessed Chris carrying the teddy bear on several night shift laps!

Thank you Chris and team for organising such a fantastic event

Joe S – half marathon over the 3 legs he ran.

Funny moments – Will woke up in the night to see a McDonalds had been left for him – he thought he was still dreaming!

Joseph F, age 10, ran non-stop and completed 15k, while his brother, Oliver, age 7, completed 10k. an awesome achievement by both of them. They were both very proud to take part and take their turn to hold the torch.

Zac B set himself a 5k distance challenge on Sunday and we were absolutely amazed that he managed just over 9k – running for the entire hour! His little brother Ruben, ran with us in support and made it to 3.5k, his furthest distance yet.

We’re both incredibly proud of them and that they had the opportunity to be involved and raise money for such worthy causes.

Emily F (13 years) would like to be included in the report.  She ran 15 laps on the Saturday – the furthest she had ever run I one go.  She then returned on the Sunday and completed a further 16 full laps plus a small lap – so about 11.5kms making a total half marathon across the weekend.  She is super proud of herself (though a bit achy today)!

Thank you all for putting on such an amazing event.  It has been a fantastic opportunity for Emily to challenge herself and achieve so much

Isobel O age 8 took part in the pier run with the support of her brother Max age 10.

Isobel set herself a target of 12 laps before the race. After 1 lap she said she was giving up!! But with encouragement she did complete 12 laps in her hour. Very proud.

Max beat his target of 12 & completed 16 laps. They were joined by their 3-year-old cousin Hugo who came along to cheer them along & joined them for 3 laps as well!

William B-W aged 9 ran 15 laps of the Pier. His twin brother Edward, ran 14 laps of the Pier. They buddied up with a new friend they made, Jeremy. They all managed to run with the Olympic torch and the teddy bear made it round with them for a few laps

­­­­­­­­­­­­­­­­­­Jeremy K is super proud to have run the equivalent of a half marathon during the event – spread over two one-hour stints. Most of it was at sprint pace and fuelled by chocolate! A big personal achievement for little legs! He more than earned his sponsorship.

­­­­­­­­­­­­­­­­My 11-year-old son, Bertie, loved taking part. He ran in the 09:00 Sunday leg when the early morning sun was shining and Weston Bay looked stunning.  He managed 10k non stop. This was only the second time he’d done that distance. He had to dig deep towards the end but showed great determination. He is already talking about doing the full 24-hours when he’s older! Thanks for arranging this. It really inspired Bertie Elwood ran 13 laps on the Saturday and 7 on the Sunday – unsure of mileage but think Saturday would have been almost 6 miles. His aim was to run 5 laps so he well surpassed that! Really proud of him – he is also proud of himself. I don’t think he thought he could run that far – achy legs on Sunday though! You all did so well – It’s a great event, well done.