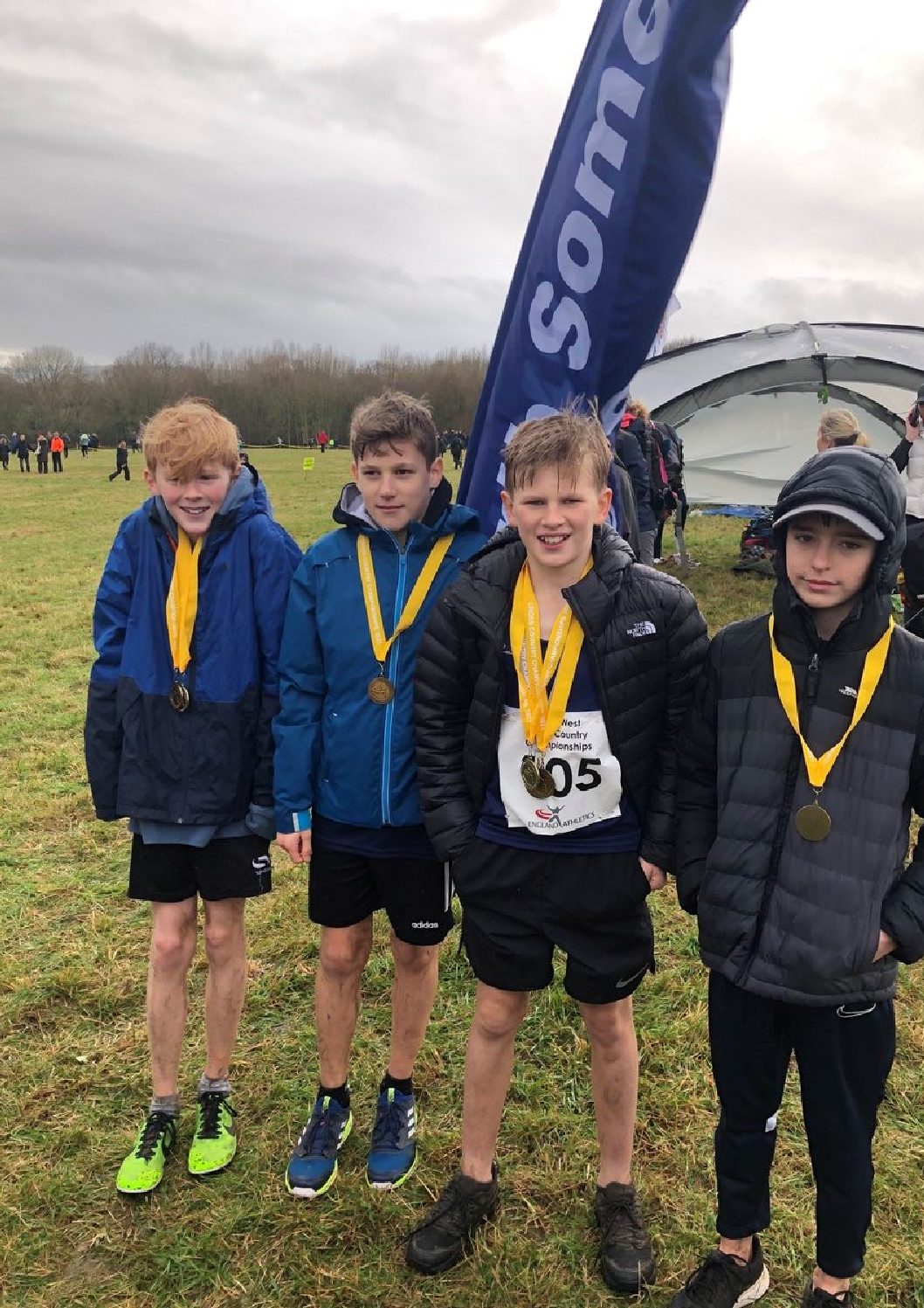 After her disappointment in just falling short of sealing a place in the GB team for the European Cross Country Champs in Dublin last month, Ellie Wallace continued her fine run of recent form to win the South West Cross Country Championships Senior Ladies title near Taunton last weekend.

Wallace pulled away from the field in emphatic fashion midway through the first lap of the tough 7k RAF Merryfield course. Making light of the heavy conditions underfoot, she extended her lead throughout to finish a full one minute clear of the 2nd placed athlete. She also led the County of Avon senior ladies team to Gold in the Counties competition.

The clubs under 13 boys ‘A’ team of Joe Finch, Leo Darlington, Felix Ashby and James Bennett cruised to Team Gold in the Club championship competition. Finch also secured the individual Silver medal with a fine 2nd place finish after a gargantuan battle down the home straight with rivals from Team Bath and City of Plymouth AC. Only 4 seconds separated the three athletes in the tightest finish of the day.

For their efforts, Finch and Darlington also won additional Gold medals in helping the County of Avon U13 Boys team to the Counties competition Title.

Finch, Darlington 8th, Ashby 16th and Bennett 27th, who ran half the race in one shoe! led an under 13 boys squad to be envied on the cross country circuit. Following their Bronze medal success at the National Road Relay Championships in Birmingham back in October, they currently lead the highly regarded Gwent Cross Country League after the first three fixtures. So still more to come from these boys for sure!

Other highlights for the club included Sam Gentry’s fine run in the senior men’s race. After his excellent 6th place finish just the weekend before in the Clevedon Boxing Day run, he dug deep into his reserves for this one to secure a superb 13th place finish, and with it a deserved gold medal in the winning 6-man county of Avon team.

In the Mens U20 competition Will Cheek and Ben Hamblin also won team Bronze medals in helping the Avon team to third place, whilst in the womens U20 race Alice Bridger-Morales ran very well to finish a fine 6th place.

Under 15’s Ben Collins and Mia Darlington also secured county team medals on the day. Despite a recent illness, Collins did enough in 18th place to secure a slot in the U15 Boys silver medal winning County of Avon Team, whilst Darlington has made huge strides since her first cross country race in October. Her hard work over this short period paid off handsomely and a fine 22nd place secured her a slot in the U15 Girls silver medal winning County of Avon Team.

The U11 races don’t form part of the championships, otherwise the club would have secured more medals. However, they are a great introduction to championship racing for these young athletes and Edward Stoate with Oscar Warren certainly enjoyed themselves. Both ran superbly to finish 2nd and 3rd respectively with only 6 seconds separating them in a 28 strong field.