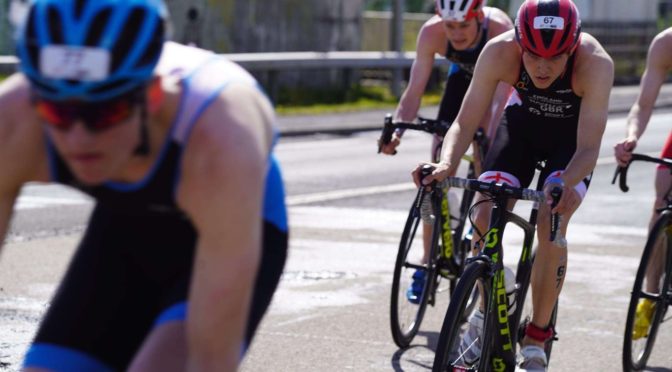 Matt Howard, endurance runner for the club, has qualified to represent GB at the Junior European Triathlon Championships in Kitzbuhel, Austria on the 18-20th of June.  After finishing third at the European qualification race on the 16th of May at Llanelli, in South Wales, Matt secured automatic selection for the event, and has his eyes set on a strong performance.

Talk us through your race

“Had a good swim for me, got clear water from the start and managed to find some good feet. Just missed the front group on the bike, with there being 5 people up ahead. My bike group worked well together and we managed to reduce the gap to around 10 seconds after the 20KM bike. Out of transition, I quickly caught up with the front group and managed to catch the third place runner with around a km to go. I then made my attack with around 600 metres to go to secure third place. I had the second fastest run of the day with a time of 15:42.”

How long have you been involved with NSAC, and how did you get started?

“I got involved with NSAC when I met Julian at the gym in around year 8 of secondary school. Since then I have consistently trained with the club and seen it grow from just a core group of around 8 to what it is today. There is no doubt that running with all the club dramatically improved my running and played a major reason in improving my running.”

“I got involved in triathlon through my dad, and quickly fell in love with the sport. This was around the same time that I had started running at school with my sister suggesting that I should go to a running club on a Friday lunch. Since then, I quickly fell in love with running and triathlon, winning multiple county championships in cross country and track and going to nationals most years.”

What are your goals for this season?

“Since going to Loughborough I have definitely improved in all disciplines of triathlon. With racing still limited because of the covid situation my goal is to do as much racing as possible! I have Europeans in a few weeks where I want to come top 20, then I also have a few European cups in Hungary and Lithuania and some British SuperSeries races.  Lastly, I want to also get a new 5K PB of sub 15 minutes.”

The club wishes Matt the best of luck in his race, and we look forward to hearing of his successes in future events.