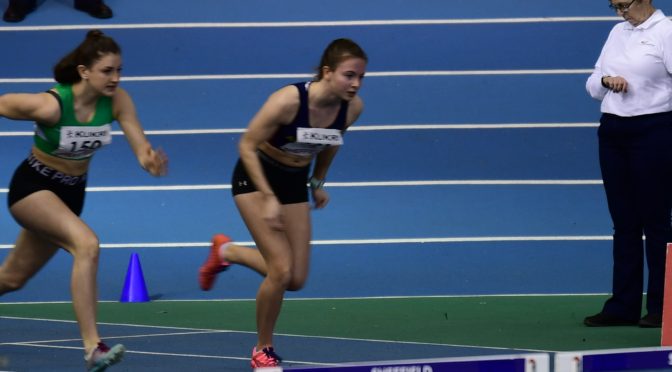 Stephanie B made the long trip to Sheffield at the weekend to compete in the U17 Womens Indoor Combined Events Championships on the 14th March.

The indoor pentathlon consists of 60m hurdles, followed by High Jump, Shot Putt, Long jump and 800m.  In combined events you are awarded points for each of your performances which then lead to a seeding for the final event so you are competing against those athletes around you for the overall position. In her first event Stephanie completed the race in a time of 9.90s just outside her best but scoring 731 points putting her in 32nd place.  The next event is the high jump where Stephanie achieved an Indoor PB of 1.45m scoring 566 points moving her up to 27th position.  Shot putt is traditionally one of Stephanie’s weaker events but she had a brilliant shot competition setting a massive new PB of 10.18m and increase of 1.33m on her old PB.  This scored her 541 points moving her up to 22nd place overall.   She had a solid long jump of 4.69m in the second round scoring 477 points and gaining 21st position ready for the 800m.  She was in race 4 of 6 and right from the gun took control of the race finishing in first place in a time of 2:28.80 scoring 708 points which meant that she broke through the 3000 point barrier for the first time with 3023 points.

This moved her up to 18th in the competition out of 46 starters.  A fantastic achievement for Stephanie.