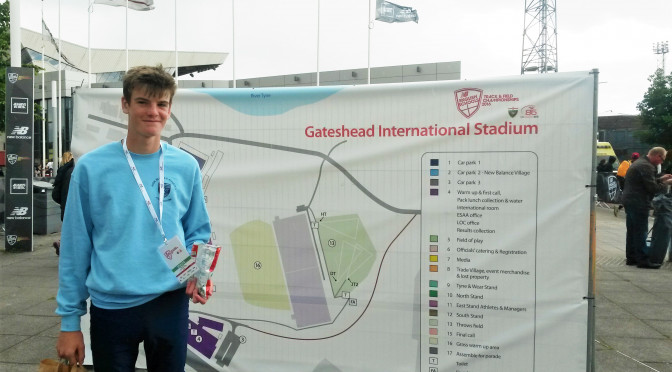 Sam Gentry’s season on the track just gets better and better. The North Somerset AC youngster appears to be well over a year that saw injury put paid to any consistency with his running.  A rich vein of recent form has seen him breaking two club records as well as recording PB after PB.

His latest success was smashing his 800m PB by nearly three seconds at the Exeter BMC meet on Tuesday night where he won the ‘C Race’ in a time of 2.04.83. This followed a first appearance at the prestigious English Schools Championships held at Gateshead International Arena, where as a bottom age group athlete he qualified for the final of the 1500m by finishing 4th in the heats. A place among the leading dozen athletes in the country is no mean fete and the future certainly bodes well for Sam.

Not to be outdone, older brother Joe is also having a super season on the track and he too achieved a new PB in the 800m ‘A Race’ with a time of 2.01.48. Eleven year old Will Maine having his first BMC outing ran superbly to record 2.32.99 to set himself a decent benchmark for future events and it was good to see his sister Lucy running a very respectable and seasons best  time of 2.38.54 over the same distance.

Mike Proffitt and Jack Wilkinson from the club were also competing at the same event, but this time over the 1500m distance with both running well in recording times of 4.30.13 and 4.39.80 respectively.

Ellie Wallace was pleased to get back to somewhere near her best when recording a seasons best in winning the 1500m ‘A’ race. She finished a full 7 seconds ahead of the highly regarded Cornish Athlete Yoyo Barnsley when recording 4.38.25.

Other local athletes Nelly and Alice Bridger Morales continue to impress and both will be very happy with new PB’s set in the 1500m at the same Exeter event. Nelly breached the 5 minute barrier for the first time to record 4.59.74, whilst younger sister Alice finished the same race in a time of 5.14. It was also good to see Lauren Ashurst making continued progress following a torrid run of injuries and a time of 5.05.12 is a sure sign that she is now well on the road to recovery.