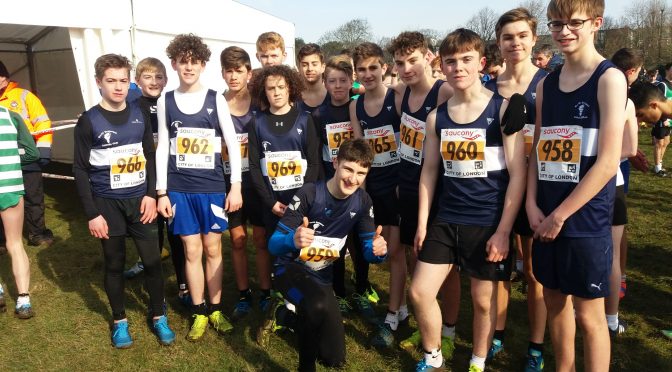 North Somerset  AC took full teams in the U13, U15 and U17 age groups to the biggest race of the year, the English National Cross Country Championship. 53 runners set off early on Saturday morning to compete at the prestigious Parliament Hill course. With fields in each age group of over 500 runners, the start is fast and furious followed by a huge hill climb and then an undulating muddy course with ditch crossings along the route.

The U17 boys produced the best team result of the day finishing 20th team thanks to fine runs by Sam Gentry, Callum Smith, Jack Wilkinson and Luca Murray. Sam also produced the clubs highest individual finish with a superb 41st place. In the girls age group race Megan McCrum was our sole representative and used all her experience to finish just outside the top 200.

The best female performance of the day went to U13 Keira Devereux. You have to be on top form and have natural ability in this race to finish inside the top 100, and Keira achieved this with a hard fought 90th place finish backed up by a great Nationals debut from Blythe Jones in 212th.

The U13 boys had 14 club runners, the majority making their Nationals debut. With 575 finishers this was the biggest age group field of the day. The club were led home by Ollie Campbell who competed well for 137th place, and was closely followed by Louie Brunsdon and Charles Broadhurst. Special mention goes to Herbie Cooksley, who in virtually his debut for the club was our 4th scorer despite being only 11 years old, a real talent for the future.

The U15 boys have performed well as a team unit all season and today they again raced in big numbers, with 14 setting off. Alfie Hocking ( 104 ), Ollie Lock (145 ) and Ben Hamblin ( 174 ) were the top performers over the 4.5k course, with Will Scott completing the scoring 4 and giving the team a creditable 27th place finish.

Poppy Burton-Dickie’s strength from her triathlon background helped throughout this demanding course as she was the clubs top U15G performer finishing 207th. Steph Brooks and Holly Avery were close behind with Ruth Day and Alysha Forsbrook  and bravely battling through the course despite foot injuries.

Joe Gentry was the sole Junior Mens race entry and he ran fantastically well to record 38m 28secs over the gruelling 9k course. It was his first attempt at the top event in the UK and his 131st place was only one minute off the first three athletes, all internationals.

It was a great day for everyone involved, all 53 runners deserve credit for acquitting themselves well on this daunting occasion, with all runners completing the course and gaining valuable experience for future championship races.