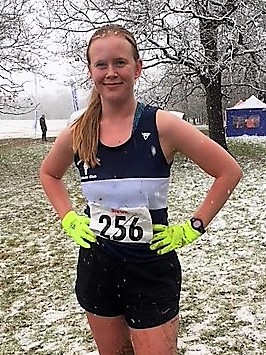 U11 Millie Redman had an outstanding race and fell just 3 seconds short of overall victory, but well clear of the chasing group her 2nd place was enough to take Avon Gold. Lyla Briffitt was the only other NS athlete on show in this race finishing 9th overall.

The snow was falling heavily by the time bottom age athletes Harry Shallcross and Max Weatherley took their places on the starting line up. Harry ran superbly for 9th overall and 2nd placed Avon athlete for a well deserved silver medal, whilst Max battled bravely for his more than respectable 17th place.

Ollie Campbell had his 2nd race in successive weekends, and once again ran with the leaders holding fantastic form throughout. Another fantastic 3rd place overall saw him take the Avon Silver. Charles Broadhurst is another newcomer going from strength to strength and his 14th from a field of 44 is an excellent result from a youngster that looks at ease whilst racing.

Bottom age Sam Holloway gets stronger with every race that passes and he should be very pleased with his 21st. Louie Brunsden was another the suffered from the icy conditions and he too battled bravely for his 23rd, whilst young Kyle Burford finished strongly for 36th in only his 2nd race in the country.

Bottom age U13 Keira Devereux ran well considering the conditions to take 6th place overall and bronze medal in the Avon competition. Team mate Poppy Adams was the only other finisher in this age group in 25th place.

Steph Brooks and Ella Johnston were the only U15 club athletes that fancied this one and both gave good accounts of themselves in 20th and 22nd respectively.

Ollie Lock was just outside the medal positions in his race amongst a strong field of athletes. He finished 9th overall with bottom age newcomer William Scott having a fine run to finish 17th from a field of 41.

U20 Alys Withers has not missed a cross country season since she started running for the club 10 years ago and her strength of character and positivity sets a fine example that all young athlete would do well to follow. As she gets older she seems to grow stronger and nobody looked more comfortable in the conditions than Alys, as she held her position throughout against some top quality athletes to finish superbly in 4th place overall and adding an Avon Silver to add to the many she has collected over the years.

The U20/17 mens race was the last up with Callum Smith and Sam Gentry waving the club after 4 withdrawals before the race. Callum appeared to cope better during worsening conditions to finish strongly for his 11th place, whilst Sam was clearly uncomfortable in the snow and will put this one firmly behind him and move on to the important races that lie ahead for him.