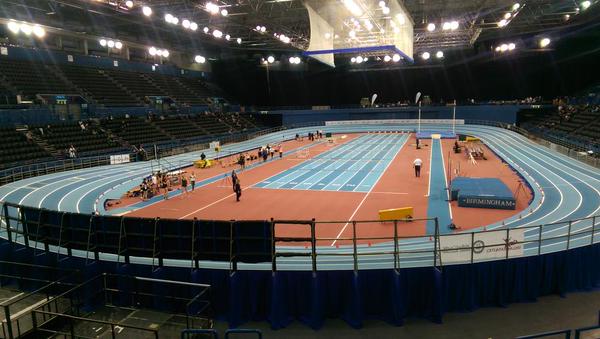 6 Athletes, 11 events, 10 personal bests, 2 event winners, 1 qualification for the World Youth games… All in all a positive day!!

Top performance came from Ada’ora Chigbo in the under-17 ladies high jump. A 1.81m personal best leap to comfortably win the event gives her the qualification standard for Colombia in July…fingers crossed!!!
Another victory in the under-15 girls 60m hurdles, for Sophie Parker. A personal best time of 9.44 seconds reward for her efforts during the winter.

Abigail Roach produced two personal bests, the first in the 200m. Second in her heat, and 7th overall, the time of 26.81 seconds chopping more than half a second off her previous best, and the promise of sub-26 seconds in the summer. Her 300m was similar, another chunk of her previous best, finishing 3rd in her heat and 8th overall in 43.71 seconds.

Jack Priestley found himself in the same heat as Charlie in the 60m. A muscular start saw him alongside the eventual winner until about 30m, and a Pb of 7.71 seconds for a second place finish in the heat and third overall. Another Pb in the 200m, 3rd in his heat and 10th overall with 25.81 seconds.

Jake Middleton continues to progress nicely. A 5th place in the Long jump, just 2 cm shy of a medal and 3cm short of silver, but another Pb with 5.70m an excellent effort. His 200m once again was strong. A 24.59s clocking a massive Pb, 4th in his heat, and 14th overall. The gap between Jake and the medals again agonisingly small. His least favoured event at present, the 60m, saw a 7.87 second Pb for 7th in his heat and 18th overall.