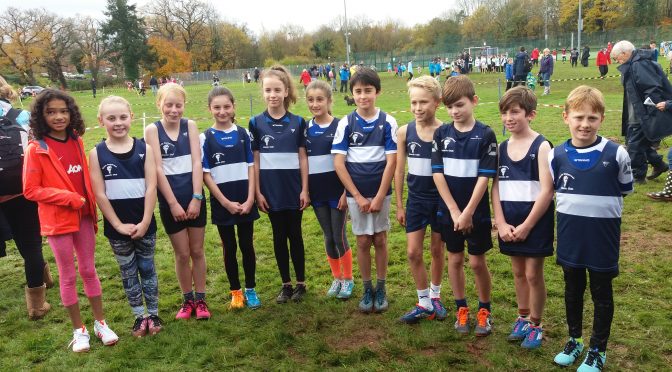 Despite a number of last minute withdrawals a full coach made the journey to Brecon for the 2nd Gwent League meeting of the season, and in the shadows of the Brecon Beacons a total of 50 athletes made it a successful day for North Somerset AC.

First up were the U11 Boys who were led by the talented Elliot Jeston, whom having found himself hemmed in at the start, worked impressively through the field for a very promising 9th place. Backing him up were Zeki Harston and Jacob Forsbrook who both ran very well for 20th and 33rd, whilst bottom age youngsters Max Weatherly and Rowan Preen should be chuffed to bits with their 47th and 55th places respectively from a 115 strong field.

The U11 Girls team were without North Somerset Schools champion Millie Redman, but six girls lined up at the start in determined fashion.  Leading the group, Mia Darlington and Lyla Briffitt worked tremendously together in their first cross country race for superb 30th and 31st places respectively and they’ll no doubt be relishing the next opportunity to race. Rosa Ford was net to finish in 55th place, closely followed by Ellie Seigle 60th, Xara McKinnen 64th and Willow Preen 68th with only 9 seconds separating the 4 girls in another huge field of 121 runners.

The U13 Boys were lying in 2nd place after the first fixture, and first home for the team in 6th place (and top club performer of the day) was Ollie Campbell to consolidate his own top 10 position in the league standings. Ollie’s competitive edge took him to the front early doors, whilst more experienced athletes sat in behind content to save themselves for the later stages. But he’ll learn very quickly I’m sure, as great things lie ahead for this young athlete.

Newcomer ‘Charles Broadhurst’ looks full of promise too and an impressive 17th place saw him finish just a few seconds ahead of Louie Brunsdon who also ran very well in 20th. Ever-present Will Maine, handicapped by a heavy cold, battled bravely throughout, with excellent support from team mates Sam Holloway, Herbie Alexander and Will Sandiford seeing just 14 seconds separate the four from 40th to 51st place. Bottom age youngster Oliver Haley completed the team scores in his first ever race finishing 81st.

The action continued in the U13 Girls race with the ever improving Keira Devereux running amongst the leading group throughout and securing a superb 9th place finish, whist Daisy Manners-Lolley was another to impress, finishing very strongly in 34th place. Working well together Poppy Adams and Abigail Taylor finished 46th and 47th respectively, as did Bella Clark and Blythe Jones in 55th and 51st. Simone Manners-Lolley completed the team scores with her 58th place finish.

With leading U15 Boy Ollie Lock missing, 12 U15 Boys rose to the occasion with a great team effort to make up for the loss of their team mate. Leading the team home in 14th position, Alfie Hocking continues to show huge improvement and he thoroughly deserved his best finish in the country to date. Close behind and working well together were equally impressive newcomers to the country discipline, William Scott and Ben Hamblin in 19th and 22nd respectively. Max Davies has also made huge strides and his 42nd place was a major improvement on his 70th place in Cardiff. Callum Day was another big improver in 47th whilst debutant Alistair Sinclair looked a very able runner in 52nd place. Emile Swanson finished in 54th and was followed in by the younger Sinclair ‘Harry’ who also looked very comfortable in 59th.

Cameron Baker-Perry was next through in 61st with Jamie Va-de-Velde in 62nd making a vast improvement from his first race in Cardiff. Jamie Pass and Louis Carr completed the team scores in 64th and 68th respectively.

It was a team full of bottom age U15 Girls that lined up at the start and despite losing momentum after a very heavy fall at the half way stage, Steph Brookes recovered well to grind out a solid 33rd place finish. Holly Avery has made great strides this year and was 2nd of our girls to finish strongly in 40th. Ella Johnston and Alysha Forsbrook worked together well throughout and a fine sprint finish from the pair up the home straight took them past rival athletes to finish in 46th and 51st respectively just 6 seconds apart. Connie Ballentine completed the teams scores in 60thplace.

In the combined U17/U20 race the large contingent of U17 Boys available at the club were largely missing. Only Will Cheek and Jacob Faulkner were present to score team points, with both showing great strength of character in worsening conditions underfoot. Will in fact had his best race to date and will no doubt be extremely happy with his 30th place finish. Jacob braved the conditions despite very little training of late and he should take heart for digging deep to finish 36th from a field of 47 runners.

Megan McCrum and Issy Gall likewise were the clubs only U17 girls in the combined U17/U20 Ladies race with Megan finishing 12th in her category and Issy looking very comfortable amongst all around her in 18th from a field of 24.