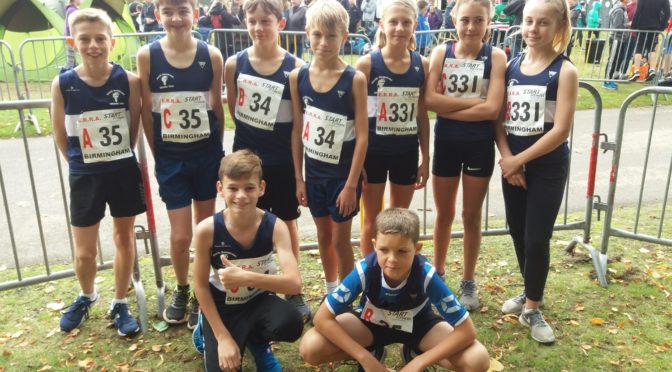 The U13 Girls were led off by Millie R who produced the outstanding performance of the day. Staying in close contention with the lead pack, Millie finished her leg in 9th place (15.06) which was the 15th best time of the day. Lyla B (17.03) and Harriet B (17.37) both fought hard to give an impressive final team position of 23rd out of 70 starting teams.

The U13 Boys fielded two teams. The A team were led out by Elliot J who had a fine run to record 14.55 for 30th place. Herbie C (15.12) relished the challenge of the hilly course and moved the team up to 22nd place. Jacob F (15.43)  ran well against good opposition to bring the team home in an excellent 23rd place.

The strength in depth of this age group was shown as the B team also competed admirably to finish in 46th place. Jude W making his endurance debut for the club held his own on the tough first leg running a time on 15.58. Harry S (17.00) had a strong run on leg 2 and Joseph S (17.46) gave his all on the last leg to complete team.

The U15 Boys were hoping for a top 20 finish and came close to achieving this. Ollie C put the team in a good position after leg 1 with a time of 13.39 for 33rd place. Will M (13.20) stormed through the field to put the team 21st with just the final leg to come. Louie B (14.17) despite suffering from illness ran his hardest for the team but they fell just short of the top 20.

The Under 15s also had an incomplete team. Ollie A (15.12) and Alex B (15.56) both gaining valuable experience by competing at this national event. Ollie improving on his Midland relay time whilst Alex ran well over the hilly course in his first year in the age group.

A fine set of results by the athletes to set the teams up well for the upcoming cross country season.